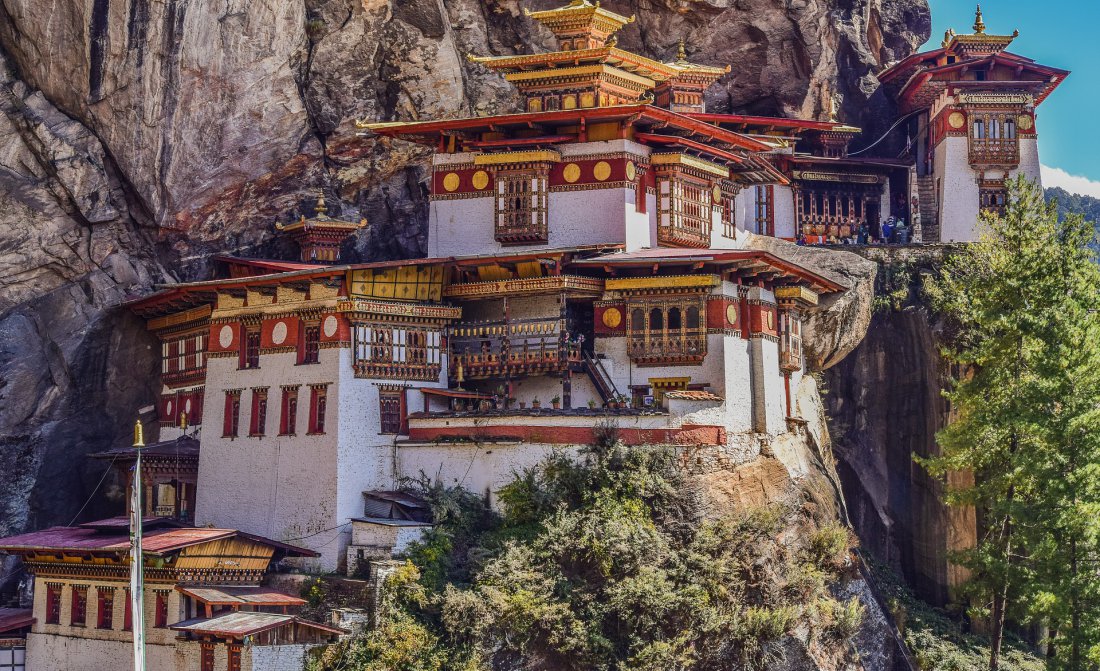 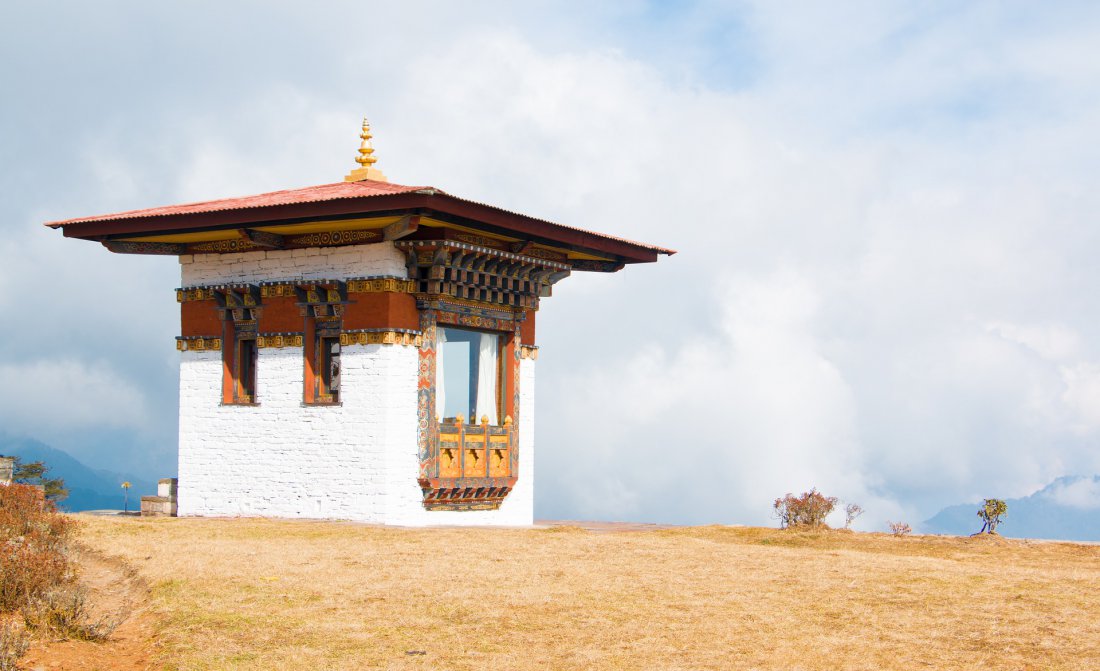 Bhutan, also known as the Dragon Kingdom, was isolated from the outside influence for many centuries, and opened its doors to modern socio-economic development in the early 1960’s. Today, Bhutan has entered the 21st Century as a unique nation known and has become a model for sustainable development by blending its unique traditions and culture with the forces of modernization. It is astounding that a country with a population of just over half a million speaks as many as nineteen different dialects and a few major languages.

This program completely presents its people, its culture, its landscapes and the people of Western Bhutan including Paro, Thimphu and Punakha, with its magnificent monasteries, fortresses and shrines perched on the cliffs of the mountains.

This program also covers driving to places in Central Bhutan like Trongsa, Bumthang and Ura Valley that is said to have been home to the earliest inhabitants of Bhutan. Here you will also find the most ancient and sacred temples and sites. Walking down the streets you would believe to have travelled back in time with an unusual yet attractive atmosphere where women still wear the traditional sheepskin shawls on their backs which double as a blanket and cushion.

On arrival at the Paro International Airport, a representative will receive and escort you to the hotel in Thimphu, the capital city of Bhutan. The drive takes you through the picturesque winding road along the Paro River.

En route visit TashichhoDzong, an impressive building also known as ‘the fortress of the Dharma Raja’. It has traditionally been the seat of the DrukDesi, the head of Bhutan’s civil government.

Note: TashichhoDzong is open during weekdays after office hours (5pm onwards) and from 9am to 5pm on weekends.

In Thimphu, visit Memorial Chorten (Buddhist funeral monument), ChangangkhaLhakhang Temple with a wonderful view of the city, Motithanga small zoological park where they have Takin, the national animal of Bhutan.

Also visit the National library of Bhutan that carries a magnificent collection of Buddhist traditional texts. Visit the school of art and handicraft that houses the famous Thanka paintings and mud statues.

Today you will visit Folk heritage museum, Institute of traditional medicine, the textile museum in Thimphu and on your way to Paro visit SimtokhaDzong. Once in Paro visit Paro Dzong.

The Folk Heritage Museum is the first structure to incorporate both monastic and administrative facilities. Since 1961 it has been the home of the Rigney School for Dzongkha and monastic studies. Its students are both monks and ordinary people.

According to a legend, SimtokhaDzong was constructed to subdue an evil spirit that was harassing the people in the region and guard the place. Hence, Simtokha translates as ‘Atop a Demon’. Simtokha is believed to be the first dzong built in Bhutan and is the gateway to Thimphu Valley.

In Paro visit Paro Dzong, also known as RingpungDzong meaning ‘Fortress on a heap of jewels’. This impressive dzong is the finest example of Bhutanese architecture and is one of the most popular and well known dzongs in Bhutan.

Perched on the side of a vertical cliff at 3000 m altitude north of Paro, the beautiful Taktsang Monastery also known as ‘Tiger’s Nest’ is the most famous and an unofficial symbol of Bhutan. ParoTaktsang is the best known of the thirteen caves in which Guru Padmasambhava meditated.

Located close to the Paro Airport, the KyichuLhakhang is an important Himalayan Buddhist Temple. Built in the 7th century, this is one of Bhutan’s oldest religious sites in Bhutan.

After breakfast at the hotel, transfer to the airport and fly to Bumthang. The representative will receive you and escort you to the hotel as booked.

JakarDzong, which means ‘Fortress of the White Bird’, is the first place in Bhutan that Guru Rinpoche visited and subsequently as the ruler converted into Buddhism. Jakar is also considered as the birth place of Buddhism in Bhutan.

JambayLhakhang, built in the 7th century is the oldest monastery in the country.

KurjeLhakhang, located further along the valley, comprises of three temples. The one on the right was built in 1652 by TrongsaPenlop (Governor of Trongsa) against the rock face where Guru Padmasambhava meditated in the 8th century.

The TamshingLhakhang located across the river from KurjeLhakhang and was founded in 1501 by TertonPemaLingpa, re-incarnation of Guru Padmasambhava. There are very old religious paintings around the inner walls of the temple, which was restored at the 19th century.

The MebarTsho (or The Burning Lake) is more of a gorge than a lake. This is a sacred lake for the Bhutanese who believe that TertonPemaLingpa discovered religious treasures from this lake in the 12th century.

Day excursion to the Ura Valley, the highest valley in Bumthang and is said to have been home to the earliest inhabitants of Bhutan. Cobbled streets, villages and farm houses give this place a medieval feel with an unusual attractive atmosphere.

After visiting Ura Valley and it surrounding, drive back to Bumthang and transfer to your hotel.

Breakfast will be served at the hotel.

After breakfast, you begin your drive to Trongsa. Trongsa meaning ‘the new village’ in Bhutanese comprises of retreats, temples and hermitages of monks.

Visit the majestic TrongsaDzong, the largest dzong in Bhutan. The TrongsaDzong is a very important part of Bhutanese history since the present ruling dynasty in Bhutan was established from here.

Also visit Ta Dzong; a watch tower built towering the east side of the TrongsaDzong. It has now been converted into a state-of-the Art Museum (National Museum) and is perhaps the most fascinating museum of the nation.

After an early breakfast, you begin your drive to Gangtey, a beautiful place situated at an altitude of 3000m. From Gangtey, one can closely view the picturesque black mountain ranges as well as the beautiful Phobjikha valley which is one of the biggest and the most beautiful valleys in the country.

En route visit Wangdue Dzong. Perched in a ridge overlooking the Punatsangchu and Dangchu rivers, this monument dominates the whole town of WangduePhrodang.

Once in Gangtey, explore Phobjika Valley and Gangtey Monastery.

The Phobjika Valley is a vast U-shaped glacial valley, also known as the Gangtey Valley named after the impressive Gangteng or Gangtey Monastery. This broad valley is the best known marshland in Bhutan and is popular for its scenic splendor and cultural uniqueness.

Transfer back to the hotel.

After breakfast drive to Punakha.

In Punakha, visit Punakha Dzong. The majestic Punakha Dzong is also known as ‘the palace of great happiness or bliss’ and is the second largest dzong in Bhutan.

ChimiLhakhang, flanked with hundreds of prayer flags sits on a round hillock near Punakha. The monastery, built in 1499 is dedicated to Lama DrukpaKinley, also known as ‘the Divine Madman’ or the ‘Mad Saint”.

After breakfast at the hotel, drive to Paro.

Once you arrive in Paro, transfer to the hotel. Rest of the day will be at leisure.

Today you will be transferred to the airport for your onward journey.