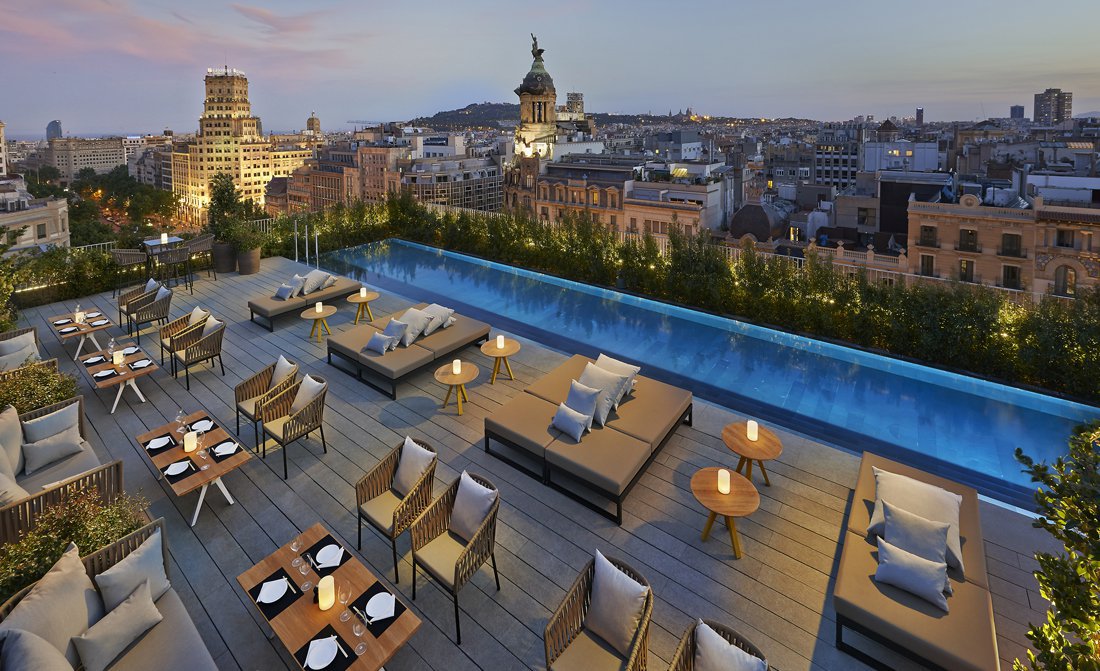 Barcelona is one of the most beautiful cities in Europe, boasting stunning Gaudí architecture, verdant greenery and vibrant cultural life. Enjoy seven unforgettable days while exploring and experiencing the best the city has to offer.

On this exclusive trip you will be staying at the luxurious hotel, that is located in the city centre. You will be accompanied by your private English-speaking driver/guide during all the excursions and tours. The highlights of the trip include visits to Barcelona's main avenues (including Rambla), Sagrada Familia Cathedral, Montjuïc Hill, the Gothic District. You will also have exclusive VIP tickets to visit the legendary soccer stadium Camp Nou. Moreover, you will go on the fascinating trip by helicopter to see the vineyards and wineries of the small villages and towns that surround Barcelona. You will also see the Formula One Circuit de Barcelona and enjoy a Tapas Tour, that will take you to the best places for tapas only the locals go.

Flight to Barcelona Airport. On arrival you will be met and transferred by the English speaking driver to Mandarin Oriental Barcelona or another hotel in Barcelona city center of your choice.

After check-in you will have a little bit of time for relaxation. After that, at around 3 p.m., the driver will pick you up by Mercedes Mini Van and help you discover the magic of Barcelona on a private four-hour long tour. From the mountains to the beach, wide tree-lined boulevards unravel into pretty parks with playgrounds and shady squares with tiny, happy bars, where a too-hot afternoon is never wasted. Exploring 2,000 years of history here’s a breeze: a port since Roman times, Barcelona has flamboyant art deco architecture to rival that of Paris; Gaudí’s fantastical façades beckon from every street corner, and the redeveloped beachfront boasts sleek modern buildings. Buzzing bars and restaurants in the Gothic Quarter and El Born ensure the city and her visitors’ lunch long and party late into the night.

You will be transferred back to the hotel. In the evening, it is recommended to take a taxi and enjoy a wonderful dinner at one of the trendiest restaurants in town.

After delicious breakfast at the hotel you will be picked up at 9.30 a.m. for a private four-hour long walking tour of Barcelona’s Old Town, which is a pedestrian-only area and must be visited on foot. During this tour you will see Barcelona’s Cathedral, the Gothic District (Pl. St Jaume, Pl. del Rei, Pl. Felipe Neri, the Roman walls remains, the Call or Jewish district), the famous Rambla and the Born district of trendy shops and restaurants around Santa Maria del Mar Gothic church. Optionally, you can also visit Picasso Museum.

This tour is exclusively focused on the Old Town. Legends, traditions, stories passed down from generation to generation heard in the streets of Barcelona's Old Town. All of these will come alive in this tour. The Gothic Quarter is the centre of the old city of Barcelona. It stretches from La Rambla to Via Laietana, and from the Mediterranean seafront to Ronda de Sant Pere. It is a part of Ciutat Vella district. Despite several changes undergone in the 19th and early 20th century, many of the buildings date from Medieval times, some from as far back as the Roman settlement of Barcelona. Remains of the squared Roman Wall can be seen around Tapineria and Sots-Tinent Navarro to the north, Avinguda de la Catedral and Plaça Nova to the west and Carrer de la Palla to the south. El Call, the medieval Jewish quarter, is located within this area too.

Enjoy the rest of the day at your own. There is so much you can do like shopping, walking, relaxing at the hotel pool or enjoying a wonderful lunch by the beach. It is recommended to choose one of the cool restaurants located right on the seaside promenade of Barceloneta, which offers a fresh space fully open to the beach and a fine Mediterranean cuisine.

After breakfast you will enjoy a very special visit to the famous soccer stadium of Barcelona Football Club: Camp Nou. You will have your VIP tickets where you will get in special places and you will be guided by one of the members of The Camp Nou. Camp Nou, "new field", often referred to as the "Nou Camp" in English is a football stadium in Barcelona, Catalonia, Spain, which has been the home of FC Barcelona since 1957. With a seating capacity of 99,354, it is the largest stadium in Spain by capacity. It is also the largest stadium in Europe and the second largest association football stadium in the world in terms of capacity. It has hosted numerous international matches at a senior level, including a 1982 FIFA World Cup semi-final match, two UEFA Champions League finals and the football competition at the 1992 Summer Olympics. The Camp Nou Experience takes you behind the scenes at FC Barcelona in the biggest football stadium in Europe: the press box with a panoramic view of the stadium, the locker room, visit the chapel - as some players do before games, enjoy the walk through the players tunnel to the sidelines, see the press room - where coaches and officials hold press conferences - and the mixed zone, where Messi and Co. give post-match interviews about the action on the pitch. Afterwards you’ll see FC Barcelona documentaries in the multi-media zone. The Museum presents the fascinating history of the club, and original major trophies can be seen.

Enjoy the rest of the day at your own leisure and later be ready for some action because at 7.30 p.m. you will be picked up from the hotel for Tapas Tour in Barcelona's Old Town. You will be introduced to Catalunya's history and culture by visiting different hidden sites of the city, and local points of interest. By the end of the walking tour you are going to really feel like you have got your bearings in Barcelona! Over the duration of the walking tour you will cover a distance of approximately 5km (3 miles). You will pop in and out of tapas bars feeling like locals. This means that you are able to really enjoy the wonderful environment of these delightful local establishments. You will taste fine white, rosé, red wines along with cava and while enjoying authentic traditional Spanish tapas and local food. All will come with thorough explanations from your guide to help you understand and really appreciate eating and drinking these fine products from Barcelona, Catalonia and Spain.

After breakfast, at around 9.00, you will be transferred to the heliport for the truly sophisticated wine experience by helicopter with a private guide. Take an incomparable tour of magical places and savour the finest wines and food, gaining insight into the history of Catalonia's vineyards and Mediterranean gastronomy in the process.

During this tour you will visit the Milmanda castle in Vimbodí Village, complete with a country breakfast in the “Homage Tower” and a tasting of Milmanda and Grans Muralles wines. Later you will visit the Torres Mas La Plana Estate and the Waltraud Winery in Pacs del Penedès with a tasting of the Mas La Plana wine. After that you will enjoy a meal at the Mas Rabell Restaurant paired with different wines. Later you will be transferred back to Barcelona and your hotel.

Today, after breakfast, at around 10.30 a.m., you will go to the Formula One Circuit de Barcelona to live up an experience full of adrenaline. Circuit de Barcelona-Catalunya is a dream come true which is enjoyed by thousands of motoring fans since 1991. Today, the Circuit has set itself up as one of the most modern sports facilities, serving as the venue for the most important motor sports events of the world such as the Spanish Formula 1 Grand Prix and the Catalan MotoGP Grand Prix. You will enjoy a guided tour around the Circuit facilities, experience GT driving 2 or 3 laps in a Ferrari (Grand Prix layout of 4,727 metres). After that, you will savour lunch at the Paddock Restaurant of the Circuit. Later you will be transferred back to your hotel.

After breakfast in the hotel, you will have free time to enjoy Barcelona on your own.

At 3 p.m. you will be picked up from the hotel and transferred to the Port for experiencing one of the most amazing sunsets in the world on a catamaran. You will see the city from an unusual point of view on board on an exclusive catamaran. You will be able to join the crew, helping to raise the sail, steer the catamaran when sailing and more. On the catamaran, you will be taken along the coast of Barcelona or the route can be adapted to whatever you choose. You’ll enjoy the loveliest vistas and the sea breeze. Catamarans provide good stability and are perfect for bringing children along. Soft drinks and some appetisers will be provided as you sail. With a little luck, you’ll see dolphins. And if time permits, it would be lovely to swim as the sun sinks into the sea against the best skyline of the city. When this activity is finished, you will be taken to your hotel.

Since it is the last evening in Barcelona, it is suggested to enjoy something special like enjoying a wonderful dinner at 2-starred Michelin restaurants.

After breakfast in the hotel and check-out, you will be transferred to Barcelona Airport for your flight back home.