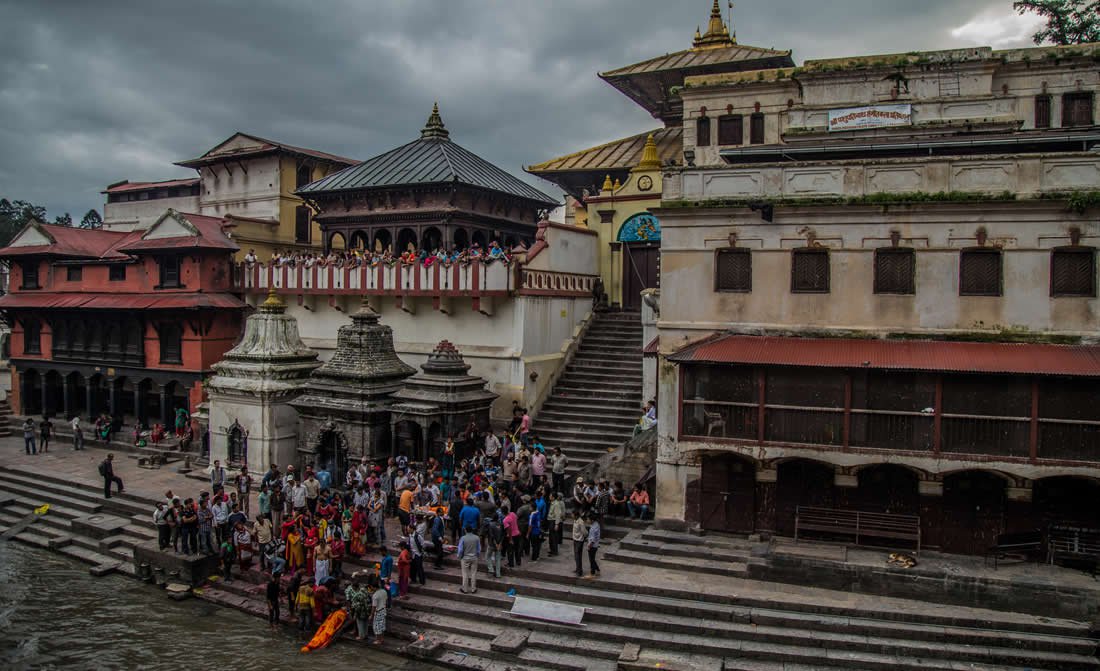 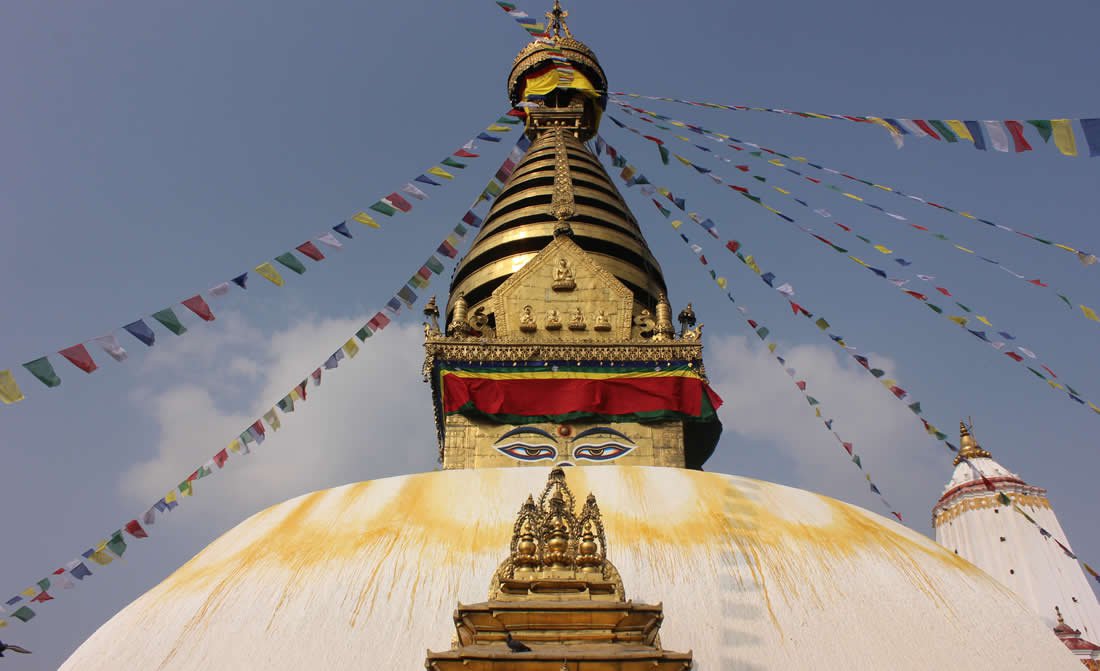 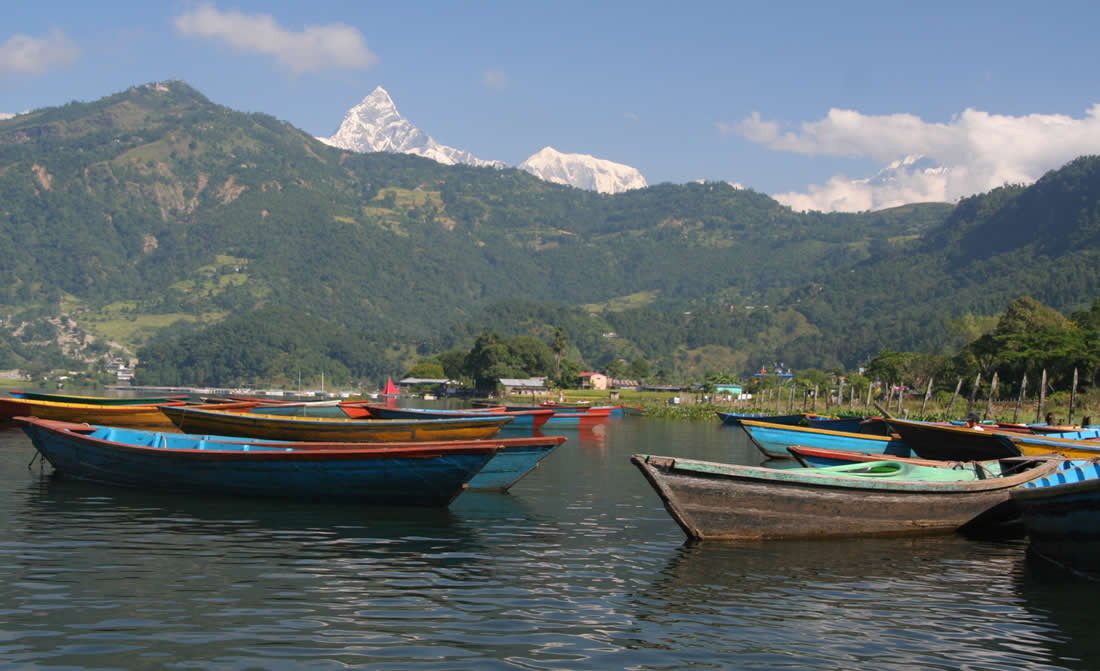 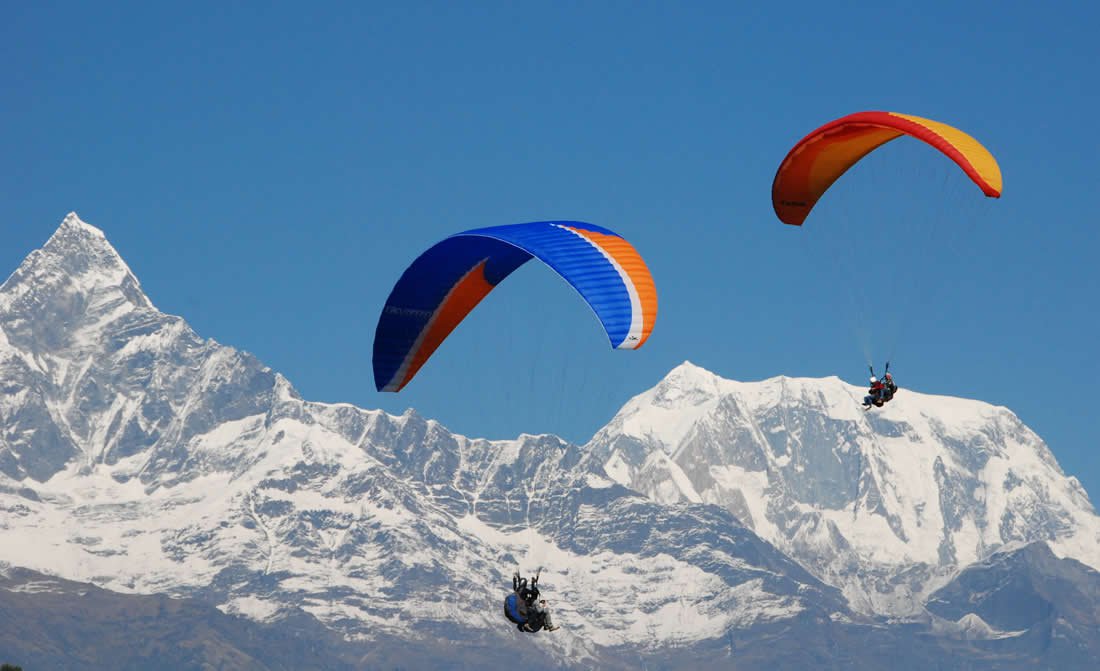 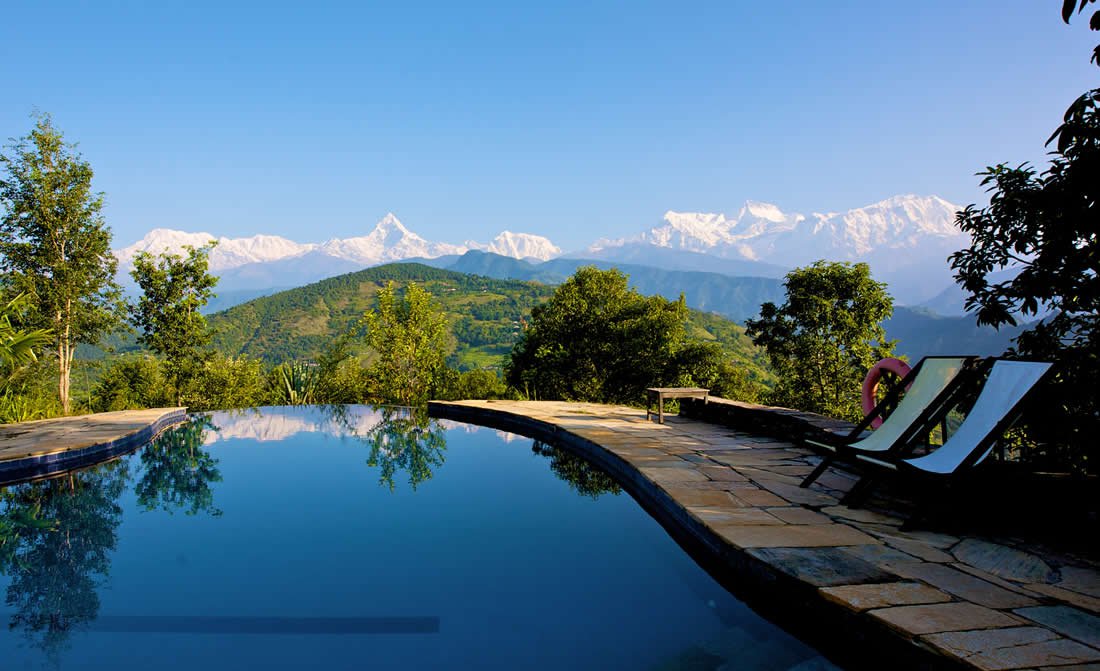 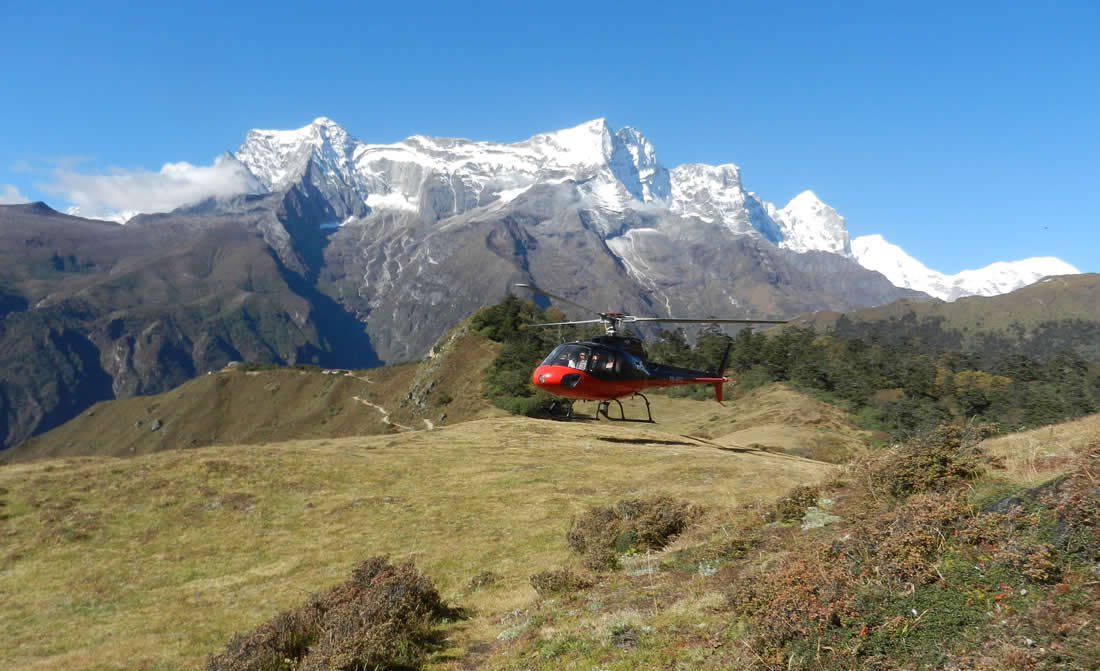 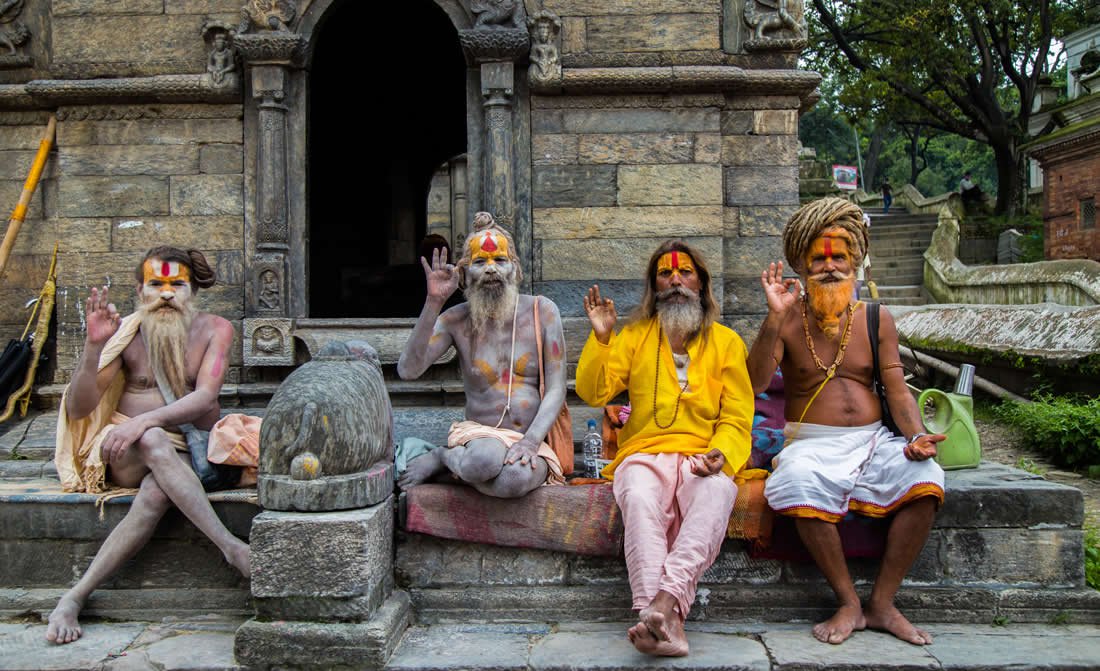 Nepal boasts eight of the world's tallest mountains and the world's oldest Hindu and Buddhist sites. While Kathmandu Valley is made of three ancient cities filled with enchanting medieval palaces, pagodas, temples, statues and stupas, the rest of the kingdom offers unparalleled adventure options with abundance in flora and fauna. As for its people - from the Tharus that share their land with the splendid Asian tuskers in the plains to the brave Yak herders of Dolpo, they are as amazing as the land itself. Here in its tropical jungles the Royal Bengal Tiger prowls, higher up the legend of the Yeti lives on. Although modernization has set in, the quintessence of ancient Nepal remains amongst its people.

Fly to Kathmandu. After you clear customs and immigration at the airport, you will be met and transferred to the hotel.

After breakfast at the hotel, start your sightseeing by visiting Boudhanath Stupa; a UNESCO World Heritage Site. Boudhanath Stupa is one of the most imposing landmarks of Kathmandu. This ancient stupa is built on a massive three level mandala style platform and is the largest in the world. The base of the stupa is adorned with 108 small images of the Dhyani Amitabha Buddha and inset with prayer wheels. Thousands of pilgrims circle the stupa in a clockwise direction each day spinning the prayer wheels.

Also visit the magnificent temple of Pashupatinath with its astonishing architectural beauty, which is situated on the bank of the sacred Bagmati River. This temple is regarded as the most sacred temple of all Lord Shiva temples and is listed as a UNESCO World Heritage Site. It is also Nepal's most renowned Hindu cremation site.

Later visit the Patan City, the City of arts and architecture founded in 250 A.D. and also known as Lalitpur. It is renowned for its fine works in bronze, silver and copper. Visit the Durbar Square, Royal Baths, Mahaboudha, Krishna Mandir and Hiranya Verna Mahabihar (the Golden Temple). A visit to the new Patan Museum is a must. The museum faces Durbar Square and is housed in a beautifully restored and renovated former Malla presidential palace. The collection spans much of Nepal’s cultural history, primarily exhibiting metalwork sculptures from Hindu and Buddhist deities, typical of Patan’s tradition in craftsmanship. Written commentary explains their significance to Nepal’s art history, spiritualism, cultural heritage and contemporary life.

Today you can enjoy an optional Mountain Flight, which offers this rare, fascinating opportunity to embrace the legendary Himalayas and discover the ineffable beauty that is guaranteed to be one of the most mesmerizing experiences ever. The one-hour Mountain Flight takes off from the Kathmandu Airport to the Everest, a must-see landmark in Nepal and at 8848 m, the highest and most majestic peak in the world. The whole experience is a pure delight; soaring 25,000 ft. above ground, it offers a breathtaking view of the mighty Himalayas. Zipping above clouds, though the seemingly endless scintillating snow-capped peaks, over glaciers and gorges, this is the journey through the world’s highest peaks.

After the Everest flight, you will visit Swayambhunath. Perched on a hilltop, Swayambhunath Stupa is an ancient sacred Buddhist shrine that holds utmost importance in the Buddhist community. It is also known as the Monkey Temple and is listed as a UNESCO World Heritage Site. This stupa is perhaps the most enigmatic of all holy shrines in Kathmandu.

Later visit Kathmandu, the largest city of Nepal, which is the political as well as the cultural capital of the country. Like any big city, Kathmandu has seen rapid expansion in the last decade, but despite the hustle and bustle so typical of metropolitan cities, its people remain as refreshingly friendly as ever. Much of the heritage sites have been damaged by the April 2015 earthquake. Restoration is under process.

You will  visit the vegetable & spice market in Ason, and see its many courtyards and bustling bazaars. From here you can take a local rickshaw (tricycle) ride to Thamel, a happening tourist hub of Kathmandu.

After breakfast, depending on the flight time, you will be transferred to the airport for a 20 minutes flight to Pokhara.

Pokhara has mesmerized visitors from all over the world with the rare combinations of snow-clad peaks and snow fed lakes and rivers. It is the starting point for many of Nepal’s most popular trekking and rafting destinations. The serenity of the Phewa Lake accompanied by the grandeur of Machhapuchhre creates an ambience of peace and magic. Pokhara is the home for dense forests, gushing rivers, lucid lakes and the world famous view of the Himalayas.

Visit a few places in Pokhara. The Davis Fall is a unique waterfall that falls directly into a deep and narrow canal with no ends. Mahendra Gufa (Gufa means Cave in Nepali) is a house of bats and provides an adventure on its own. This limestone cave is provided with artificial lighting systems. But if you want to make your cave walk more adventurous, then you must take a torch light and go searching the alternative ways inside the cave. Gupteshwor Mahadev Cave is one of the longest caves in Nepal.

Today you will be involved in the activities offered by the lodge. For those who are keen on watching birds, a walk before breakfast with the lodge’s skilled local guides will offer the chance to see many birds as they forage for food. Bulbuls, Barbets, Babblers and other species typical of the middle hills of Nepal are seen regularly around the lodge.

After breakfast explore the flora and culture of the hill villages around the lodge with an outdoor setting for lunch. Combining steady walking, rural villages, farmland and forest, the walk will be a mini-trek and typical of a day’s walking in the Himalayas.

You will be given an option for longer or short hikes around the lodge escorted by a TMPL guide.

Tiger Mountain Pokhara Lodge provides plenty of opportunities around the area to explore. Spend the day hiking or at leisure by the infinity pool or terrace with spectacular view of the mountains.

Today you will fly back to Kathmandu. After lunch drive to Bhaktapur or Bhadgaon, literally the ‘City of Devotees’, a major tourist destination that takes visitors back in time. Bhaktapur lies on the Arniko Highway that connects Kathmandu to the Chinese border. Bhaktapur is still untouched by rapid urbanization and has managed to retain its brick paved roads, charming red brick houses and a way of life that goes back to medieval times. This ancient city is also famous for pottery and woodcarving amply displayed on the squares and windows respectively.

The extraordinary Bhaktapur Durbar Square is a UNESCO World Heritage Site and its monuments reflect the glory days of the Malla Dynasty when art and architecture thrived in the three cities of the valley.

In Bhaktapur Durbar Square, visit the Nyatapola Temple, the unique temple that literally means ‘five storied’ and rises above the city’s landscape as a remarkable landmark. Bhairavnath Temple, dedicated to Bhairav, the God of Terror, is a three-storied temple noted for its artistic grandeur and stands adjacent to the famous five-storied Nyatapola Temple.

The Golden Gate is the entrance to the 15th century Palace of 55 Carved Windows. The golden gate is a masterpiece in repousse art, which has added splendor to this palace square that consists of buildings dating from the 13th to 18th century.

You can also stroll around Taumadhi Tole, a short street lined with tourist shops.

Bhaktapur was one of the most affected areas of the April 2015 earthquake. Renovation is currently under process.

In the evening enjoy a farewell dinner.

Today you will be transferred to the airport for your onward journey.