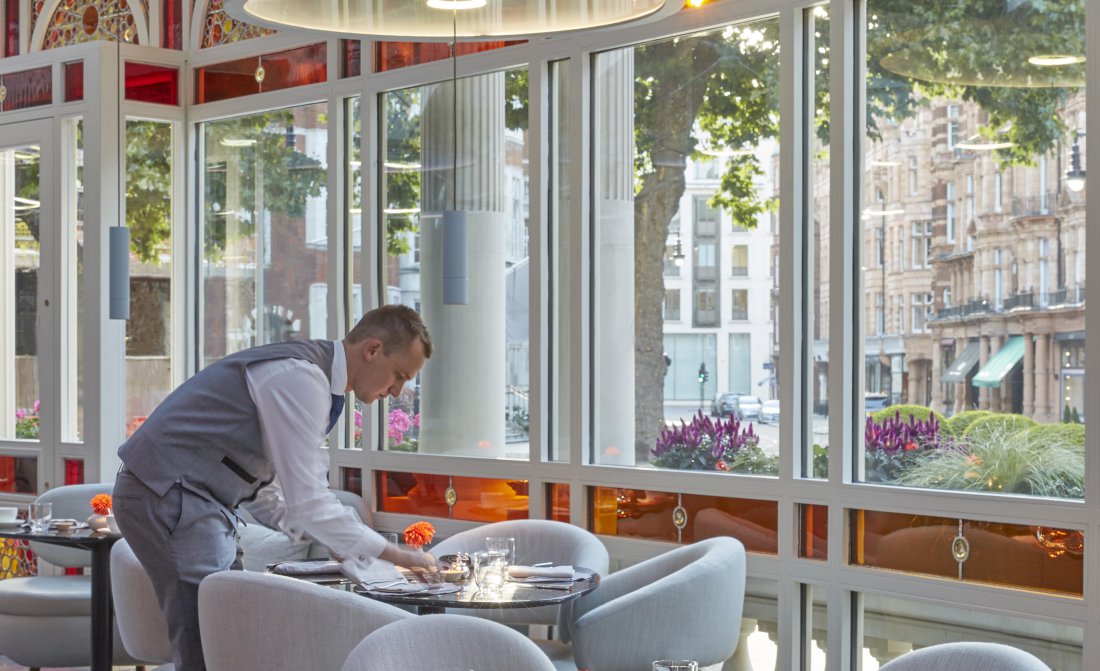 Internationally renowned chef Jean -Georges Vongerichten has opened his new restaurant, Jean-Georges at The Connaught, in one of London’s most distinguished hotels.  Overlooking fashionable Mount Street in the heart of Mayfair the restaurant will offer informal dining throughout the day in a relaxed, contemporary, neighbourhood setting.

The eclectic menus at Jean-Georges at The Connaught are inspired by both Jean-Georges’ classic French training and signature use of Asian flavours, whilst also featuring his distinctive take on British classics from Fish & Chips to traditional afternoon tea, influenced by his earlier working life in London.  Sourcing the best of British ingredients, the menus will reflect the simple farm to table fresh approach long pioneered by Jean-Georges, similar to his New York restaurants at The Mark, ABC Kitchen and most recently the pioneering vegan eatery ABCV.

Commentating on his opening at The Connaught Vongerichten said, “I am so excited to be returning to London at such a vibrant and dynamic time. I’m constantly travelling the world and it’s always the energy and diversity of this capital city that stimulates me most. The Connaught, the first hotel I ever visited in London holds a very special place in my heart, and I am honoured to play a part in its long culinary legacy”.

The new breakfast menu at Jean-Georges at The Connaught will feature his signature healthy morning shakes, acai bowls and dosa while of course still offering Connaught classics of truffle scrambled eggs, French brioche toast and the Full English. Lunch and dinner will feature Jean-Georges classics

from Egg Toast & Caviar to Crispy Salmon Sushi and his legendary Black Truffle and Fontina Pizza, which for the first time in The Connaught’s history will also come as a take-away.

Highlighting the way The Connaught balances its distinguished history with a passion for the new, the design of Jean-Georges at The Connaught has been spearheaded by contemporary interior architect John Heah, with emphasis on craftsmanship and art, including Louise Bourgeois and a bespoke creation from Sean Scully. The wall to ceiling windows overlooking Mount Street have been enhanced by French artist Jean-Michel Othoniel who has lent his exuberant aesthetic to a series of stained glass windows representing the different stages of the day (from sunrise in the east to sunset in the west) tinting the space in rich hues of orange and gold as the sunlight streams in to the restaurant.

Jean-Georges at The Connaught has also collaborated with leading French graphic designer and illustrator Jean Jullien on the menu designs adding  a touch of whimsy and humour to the art of eating out.

This move marks a return to the Maybourne Hotel Group for Vongerichten, who previously operated the legendary Vong restaurant at The Berkeley which closed at the end of 2002. Vongerichten currently operates some of the world’s leading restaurants, including the eponymous Jean- Georges, ABC Kitchen and The Mercer Kitchen in New York.

Jean-Georges at The Connaught will serve breakfast, lunch, afternoon tea and dinner throughout the day, seven days a week. Reservations can be made on 0207 107 8861. Hélène Darroze will continue to operate her two-Michelin star restaurant on the other side of the hotel.