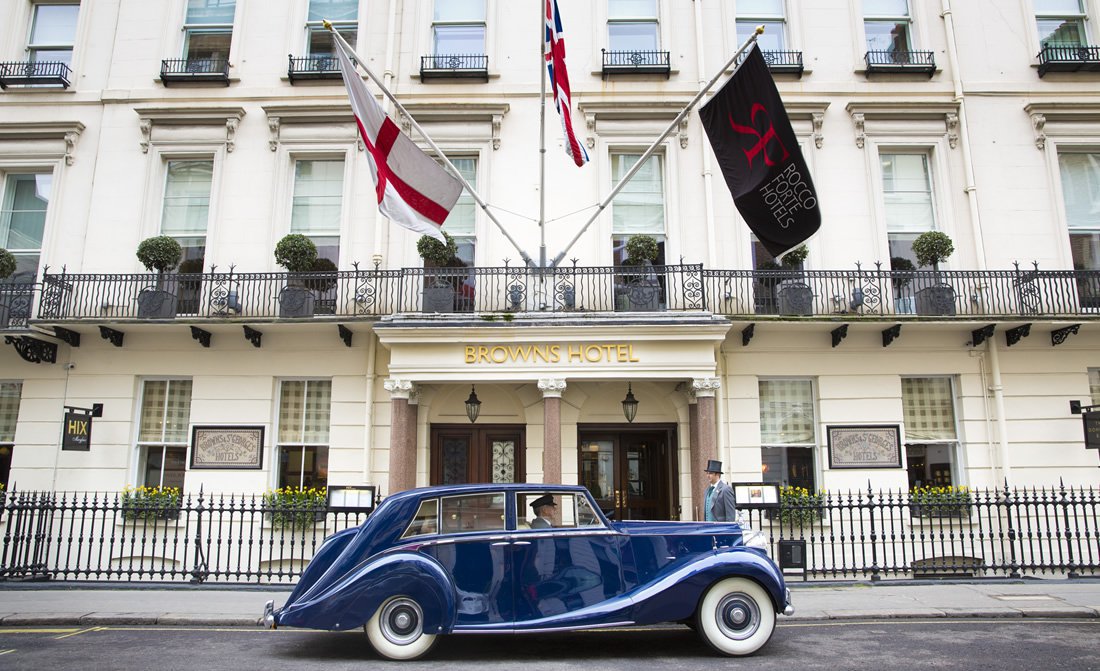 David Young, the Head Concierge at Brown's Hotel, reccomends the best events in London for September, 2016.

No Man’s Land: Wyndham’s Theatre - On-screen nemeses and real-life BFFs Patrick Stewart and Ian McKellen bring their hailed production of Harold Pinter's 'No Man's Land' – directed by Sean Mathias – to Wyndham's following a short UK tour. The cryptic classic follows a powerplay between writers Hirst (Stewart) and Spooner (McKellen) as they booze into the night, only to be interrupted by two unexpected arrivals. Thursday September 8 2016 - Saturday December 17 2016.

The Libertine: Theatre Royal Haymarket - Dominic Cooper makes his West End debut as the most notorious rogue in Restoration England, the Earl of Rochester, in this thrilling new production of The Libertine. Based on true events, Stephen Jeffreys’ sharply written, comic play tells the story of the charismatic poet and playwright with a legendary appetite for excess. A close friend of King Charles II, Rochester’s life of debauchery knows no bounds until headstrong actress Elizabeth Barry (Ophelia Lovibond) makes an appearance at the Playhouse. Could she finally be the one to tame him?

No’s Knife: Old Vic Theatre - The world premiere of No’s Knife sees Samuel Beckett, a titan of theatrical writing, exploring the powerful resilience to stay alive. Hard on the heels of a sold-out international tour of the Beckett Trilogy, Lisa Dwan presents a fresh and penetrating interpretation of this monologue. Recognised as modern theatre’s foremost adaptor of Beckett’s work, Lisa brings her unexpected and compelling voice to these hitherto unperformed writings.

Pride & Prejudice: Open Air Theatre - It is a truth universally acknowledged, that a single man in possession of a good fortune, must be in want of a wife... The ultimate romantic comedy, Jane Austen’s story of the five Bennet sisters and their relentless pursuit of suitable husbands is one of the best-loved novels ever written, constantly topping the polls of favourite books. Don’t miss it once again, only this time at the Open Air Theatre

Bumblescratch: Adelphi Theatre - Set in London during the Great Plague of 1665 and the Great Fire of 1666 and told from the perspective of a demented, lascivious plague rat named Melbourne Bumblescratch, who demonstrates his unique and twisted love affair with the ancient city through telling his marvellously gruesome tales. This major West End concert presentation - featuring a stellar line-up - is specially staged as part of commemorations for the 350th anniversary of the Great Fire of London, which raged in the East End for four days from 2 to 5 September 1666.

The Alchemist: Barbican Theatre - When London is hit by an outbreak of the plague, the wealthy Lovewit flees to the country, leaving his townhouse in the hands of his trusted butler, Jeremy. But no sooner has his master left than Jeremy begins turning the house into a den of criminal activity. Assuming an alias, he recruits fellow conman Subtle and prostitute Doll Common to help him and sets out to rip-off half of London. Soon every knock at the front door is another unwitting victim begging to be relieved of their cash. Things couldn't be going better for the gleeful trio until they receive a very unwelcome visitor.

Totally Thames - The Totally Thames festival will once again grace the banks of our much-loved waterway this September (Sep 1–Sep 30 2016). An annual celebration of the River Thames, dive into a month-long party full of arts festivals, community events, regattas, river races, foreshore archaeology and environmental activities. With new installations for 2016 and an event line-up bigger than previous years.

Royal Greenwich Tall Ships Festival - Dozens of tall-masted sailing ships will grace the east end of the Thames with their presence for this five-day festival. It’s a chance to taste just how busy and vital the Thames used to be as the quickest trade route out and into the city, and how stunning it would have been to stand bankside and witness huge vessels swim past. Visitors can even climb on board, as well as enjoying gigs, parades, firework displays and other entertainments.

Open House London - This hugely popular, capital-wide annual festival of architecture celebrates its twenty-fourth anniversary in 2016 and takes place over the weekend of September 17 and 18. The festival allows access to hundreds of buildings not normally open to the public – private homes, government buildings, historic sites, educational establishments and many others. This year the festival has added more than 200 new London venues including the Brutalist Salters' Hall next to the Barbican and Brentford's 'floating high street'. Old favourites Tower 42 and the Gherkin are back on this year's programme.

London Fashion Weekend at Saatchi Gallery - This September, the London Fashion Weekend sees designers SIBLING, J.JS Lee and Preen by Thornton Bregazzi showcasing their AW16 collections in the stunning setting of the gallery. If you like what you see on the catwalk, get your seasonal wardrobe fix from designer brands during the weekend, often at discounted prices. There's much more to enjoy than just updating your collection, with free insider talks from key editors, stylists and experts, as well as beauty treatments, manicures and massages for those looking for a spot of pampering. From 22 September 2016 to 25 September  2016.

Japanese Matsuri in Trafalgar Square - The annual festival transforms this central part of the capital into an outpost of Japan between 10am and 8pm, with a heady mix of music, dance, food and family entertainment. Enjoy martial arts demonstrations, Japanese songs and dance performances across two stages. Tuck into delicious Japanese festival food at one of the many stalls, and children of all ages can lose themselves in the wonders of calligraphy and origami in the activity tent. Get creative drawing on the giant canvas wall and take part in the fantastic Nodojiman karaoke competition. With something for all the family to enjoy, Japan Matsuri is the perfect mix of culture and fun. 25th of September.

Björk Digital at Somerset House - Using the latest virtual reality (VR) technology, you’ll be able to engage with artist and musician Björk in a private theatrical experience during Björk Digital at Somerset House. A full programme of events accompanies the exhibition, plus an interactive education space showcasing work from Björk’s app, Biophilia. You can also watch promotion videos made throughout her 24-year music career.

You Say You Want a Revolution: Victoria and Albert Museum - This major exhibition will explore the era-defining significance and impact of the late 1960s, expressed through some of the greatest music and performances of the 20th century alongside fashion, film, design and political activism. This seminal exhibition will shed new light on the wide-reaching social, cultural and intellectual changes of the late 1960s that followed the austerity of the postwar years, not just in the UK, but throughout the western world.”

Turner Prize: Tate Britain – The Turner Prize, named after the English painter J. M. W. Turner, is an annual prize presented to a British visual artist under the age of 50. Awarding the prize is organised by the Tate gallery and staged at Tate Britain. Since its beginnings in 1984 it has become the United Kingdom's most publicised art award. Discover the four artists shortlisted for this year’s award.

Julie Cockburn: The Photographers Gallery - Delicate and unnerving, Julie Cockburn’s photo-based collages embellish and distort vintage images using tools that range from embroidery to Photoshop. To begin each piece, Cockburn trolls junk shops and garage sales for old photos, often studio pictures from the middle of the last century. She scans them and uses the computer to plan what she wants to do. Then she transfers the digital sketches back onto the original, and proceeds to cut or sew or draw or paint. The results subvert the decorum of the tidy portraits and landscapes she favors, making something strange and beautiful.

Maino’s Adorations: Heaven on Earth. The National Gallery - Experience two outstanding masterpieces by Spanish painter Maíno, on display in the UK for the first time. The loan of two remarkable paintings from the Museo Nacional del Prado in Madrid provides a rare opportunity to present the work of the Spanish painter Fray Juan Bautista Maíno  – an artist of exceptional talent whose name remains largely unfamiliar outside of Spain. 'The Adoration of the Shepherds' and 'The Adoration of the Kings' originally formed part of a vast 'retablo' (altarpiece) for the high altar of the church in the Dominican house of San Pedro Mártir in Toledo. Painted from 1612 to 1614, following his return to Spain after an extended stay in Italy, they are among Maíno’s greatest works.

1920s Jazz Age: Fashion & Photographs. Fashion and Textile Museum - The 1920s JAZZ AGE exhibition presents a glittering display of haute couture and ready-to-wear fashion from 1919 to 1929. Women’s clothing in the 1920s reflected dizzying social change on an unprecedented scale. From Paris and London to New York and Hollywood, the decade following the Great War offered the modern woman a completely new style of dressing. With over 150 garments, this stunning selection of sportswear, printed day dresses, fringed flapper dresses, beaded evening wear, velvet capes, and silk pajamas reveals the glamour, excess, frivolity and modernity of the decade. Colourful illustrations by Gordon Conway from the Illustrated London News Archive at Mary Evans and photographs by Abbe, Beaton, Man Ray, and Baron de Meyer highlight the role of photographs and magazines in promoting the 1920s look.

BROWN’S SATURDAY ART TOUR
Saturday 17th September - Discover the exciting Mayfair art scene on one of our monthly art tours, hosted by a leading gallery owner. The morning begins at 10.30am with a welcome coffee/tea in The Library at Brown’s. This is followed by a private tour of four Mayfair galleries, then a set three-course lunch in HIX Mayfair. - £60 per person. Tickets must be purchased in advance

HIX CARVING MASTERCLASS
21st September - Join Mark Hix for an exclusive carving masterclass, celebrating this quintessentially British skill. Enjoy a feast of sharing starters and all the featured cuts of meat with wines to match, followed by dessert and a goody bag including a signed cookbook and Brown’s apron. - £185 per person

ELLIE HARTLEY FLOWERS OPENS ON DOVER STREET
Brown’s Hotel is delighted to announce the opening of ELLIE HARTLEY FLOWERS at 24 Dover Street. Ellie Hartley has long been the florist for Brown’s, and now her stunning floral creations are available for guests and visitors to buy for their homes or as a memorable gift.

HEALTHY FASHION WEEK FIX BY MADELEINE SHAW
Those in need of a quick fix between shows, head to The Donovan Bar during fashion week, sit amongst the black and white Terence Donovan prints and enjoy a healthy snack created by Madeleine Shaw: cold pressed juice & 50 shades of green - £34. cold pressed juice & crudités, with energy balls to go - £30