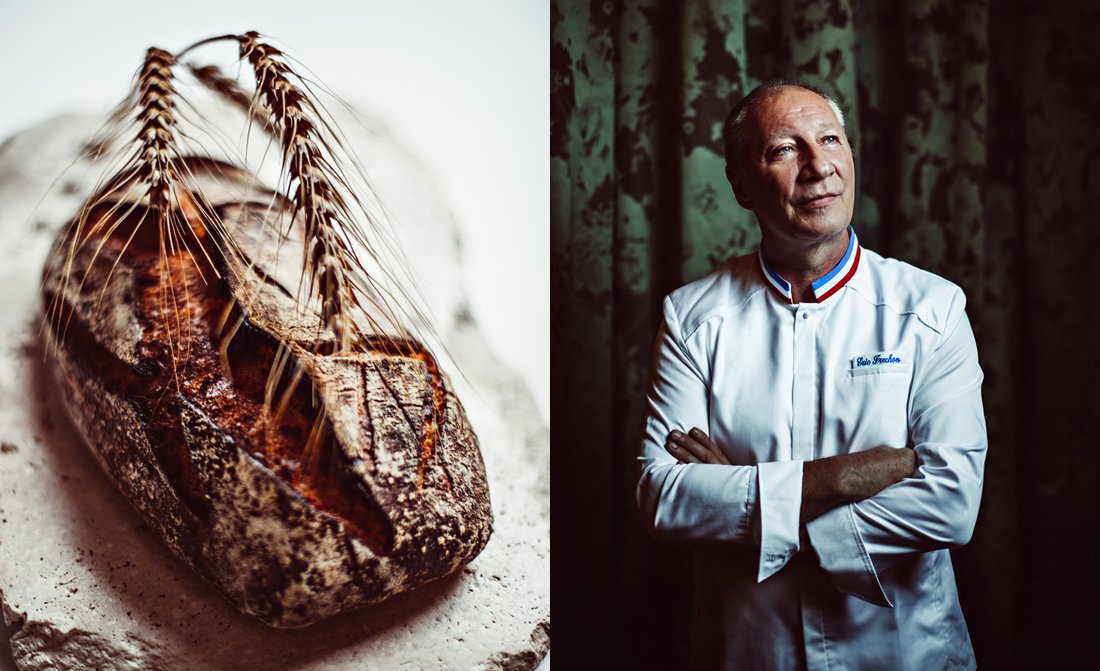 Le Bristol’s Parisian revolution: a working mill beneath the palace

Eric Frechon (@ericfrechon on Instagram) acclaimed Michelin starred chef (the Head Chef of a luxury Le Bristol Paris, an Oetker Collection hotel), brings a flour mill to the centre of Paris, and puts 100% natural ‘Living bread’ back onto the gastronomic table.

Frechon is at the vanguard of luxury, one of the greatest Michelin starred chefs in Paris, 20 years heading the kitchens of this acclaimed Parisian Palace and he has made it his quest to create perfect, pure ‘Living bread’ for his dining rooms.

‘Living bread’ is a revolution in Le Bristol Paris that goes far beyond bread. For a chef every dish is an ambassador of their skill and bread is the first encounter a guest has at the dining table, it is the opening line, the handshake, the first note, and sets the tone for all that follows. By reintroducing perfect natural bread, with its rare flavour and texture, Frechon signals his deep respect for terroir, his honour for all ingredients, his value for true craftsmanship.

An expert’s maturity engenders restraint, Frechon’s ‘Living bread’ revolution is an important reminder that he serves the ingredients,  not enslaves them with gastronomic techniques. Bread has renewed his humble respect for nature. So 100% natural ‘Living bread’ becomes Frechon’s quest.


"I do not know how to eat without bread," he explains. "At noon, during the rush of lunch service, if I do not have time to sit down to eat, a little butter spread on a piece of good bread makes my meal."


But modernity has eroded the taste and nutrition of this ‘staff of life’, he has decided bread and haute cuisine can no longer follow divergent paths.

Frechon began his quest for perfect 100% natural bread with typical thoroughness. The gastronomic lord of one of the greatest kitchens in Paris, headed to a charming hilltop village of Cucugan in Corbieres where the Master of ‘Living bread’ was fighting his crusade. Roland Feuillas and his wife Valerie gave up their city lives to ‘serve bread’. As Frechon climbed up the cobbled streets to the mill, with his own wife and son, the baking aromas produced an overwhelming emotion, reviving memories from his childhood in Normandy to breaking bread with his grandparents, when they all savoured the taste of a grand loaf of country bread. Once more he wondered, how could gastronomy have moved so far away from such purity.

Roland Feuillas is equally pleased to find this maestro in his midst. Frechon is there to learn. ‘The Cucugnan Baker’ is used to students, he has been a fascination for many since leaving his life in the city 10 years previously on his own quest for delicious and healthy bread. Many visit his School of Life project, which offers a Masters Degree in ‘Economics of living’, his aim is to re-educate bread making and consequently the whole food business.

Frechon tours Roland and Valerie’s bakery at the summit of Cucugnan. He sees the trays of resting dough, the 40-ton wood fired oven, the team of mechanical kneaders that deftly fold the dough, the turn of the seigneurial mill that crowns the hilltop and the two electric mills of Sidobre stone.

Wheat is the key to bread’s nutrition and taste. Frechon is awed by Feuillas’ binding commitment to agriculture. "If the farmer serves nature with respect and love, he who is responsible for cooking the harvest must fade behind nature’s bounty as a respectful servant."
Feuillas has been assiduous in his search for heirloom wheat seeds. Post-war agriculturists favoured cereals with greatest yield per hectare, and used a large quantity of pesticides. The flours produced were valued for their high gluten content, which facilitates the work of bakers.

The inadequacies of these flours were corrected by adding all sorts of "improvers" without the consumer ever being informed. Intensive agriculture has progressively taken place on thr countryside like a black veil. To increase yield they deliberately crossed plant species for results, compromising taste, nutritional value and digestibility.

While the emergence of organic began to reform the agricultural practices, the wheat used was still of varieties favoured for mechanisation and profitability, without the bread consumer in mind. It was necessary to go further upstream in agricultural history to source unadulterated high-quality wheat. Roland Feuillas was dedicated in his biodiversity research, hunting through collections by those who also wanted to preserve the plant heritage.

The Russian botanist and geneticist Nikolay Vavilov was a tragic footnote in this history, he dedicated his life to sustainable wheat and cereal crops, after having created the largest collection of seeds in the world that bears his name, his work was denounced by Stalin, by 1943 he had died of starvation in a prison camp.

The heirloom seeds gathered by Roland Feuillas belong to different varieties of wheat, they are the key to 100% natural ‘Living bread’ such as: Spelt, Emmer and Khorasan.

Frechon saw this was a mission of the heart and also a science, it appeared to be a great paradox that the simple fresh 100% natural bread requires the most exacting process.

Every day the bakery is provided with absolutely fresh flour. Roland Feuillas has turned ‘floortime’ upside down, this is when traditionally a sack of flour was left on the floor of the mill, he puts his heirloom wheat varieties to work immediately. Through long trail and error he discovered the earlier the flours are used, the more they actually taste like wheat and the better the results.

Using flour from heirloom wheats the baker now has far more responsibility. No longer able to rely on machinery, he has to be more attentive and ‘listen’ to his loaves. They cannot afford to overcook the wheat, and nor can they rely on leavens which would alter the flavour of the wheat. Since the proteins have not undergone oxidation-reduction, the dough has viscoelastic characteristics which are more fragile to work with, there can be no compromise ensuring they retain all their nutritional values. They are also more digestible, it is noticeable that this 100% natural ‘Living bread’ causes no sense of ‘bloatedness’.

Frechon is determined to repeat Roland Feuillas demanding protocol in his Parisian Palace - Le Bristol Hotel Paris. Feuillas reciprocates the visit, leaving his hilltop mill and travelling to 112 Rue du Faubourg Saint-Honoré. He joins Frechon in his kitchens to complete the training of all the bakers, cooks and importantly those responsible for presenting the bread in the restaurants.

But one vital element is missing, a mill to grind flour for immediate use, so Frechon must place one in the Parisian Palace. When Luca Allegri, President and Managing Director of Le Bristol Paris heard Frechon’s quest for 100% pure ‘Living bread’, he had no hesitation, such things are the essence of Le Bristol Paris: craftsmanship in search of the finest things life can offer. On October 20th 2018 a mill is installed at the prestigious Parisian address.

Today bread is no longer an incidental accompaniment to the Michelin starred cuisine, today the bread exalts the kitchen of Eric Frechon.

You might enter Le Bristol Paris for the French elegance, the indulgent service, the refinement of luxury and the Michelin starred cuisine, or you may come just for the bread.