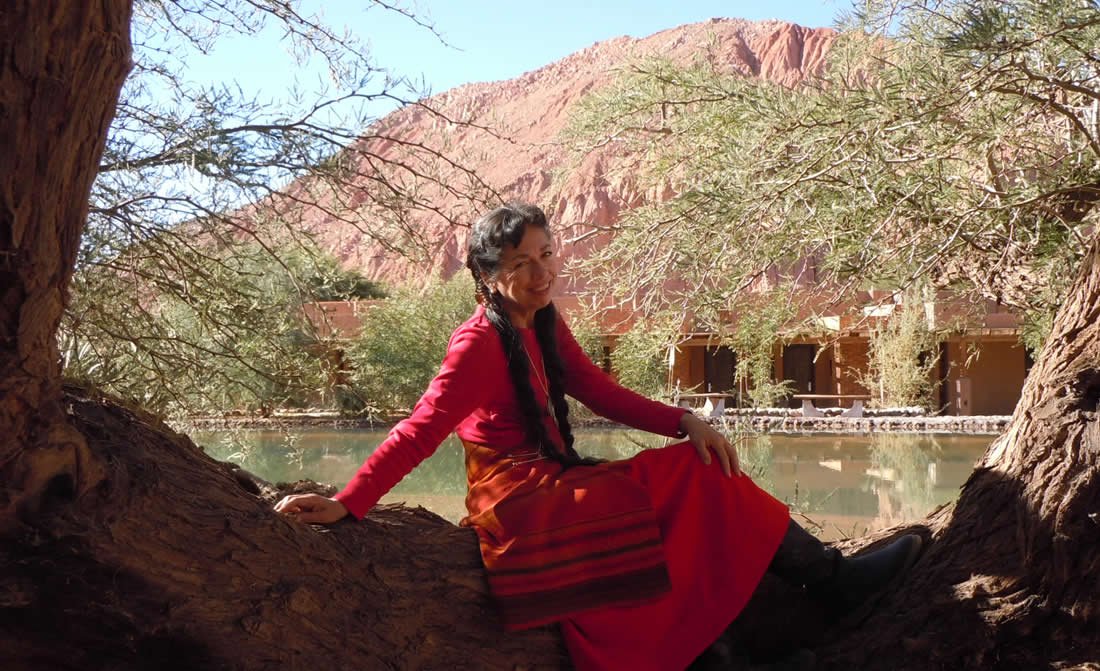 Veronica, please tell us a little bit about your education in botany.
I was the granddaughter of two grannies: one was a passionate gardener who spent her life bent over the soil tending her garden and another one who became (under the astonished look of her friends and relatives) a farmer upon becoming the widow of her second husband who owned a large farm. This lady mounted her horse the dawn after his funeral and went right on with farming until her old age impeded her to continue; she cared for her land until she herself left the earth and made it her forever resting site. My father was an amateur naturalist (he was a Metallurgical Engineer) who opened my eyes to the perfection and aesthetics of nature since I was first aware of its existence. This family constitution surely interfered or conditioned my decision to become a Biologist and, as such, to be trained as a Botanist who went into Scientific Research and Lecturing at the Catholic University in Santiago and later on in Stanford University’s Overseas Program. I began as a Taxonomist and as such became acquainted with Chilean plants and their fascinating diversity which is due to the astonishing diversity in the geography and ecology of our landscape. Many European naturalists have been bewildered by this and consequently dedicated years of their task to roam our territory gifting us with their discoveries and written testimony represented in books and natural collections in local and foreign museums and scientific institutions. Later on I drifted into Plant Anatomy and was invited to perform scientific research in the Atacamanian desert which totally enchanted me; its barren hot and dry altitudinal planes became my favourite place on earth to explore and study. Scientific lectures, publications and expeditions witness this enlightenment which illuminated my life and subsists until today. Sometime within this period I travelled to France and enlarged my activities around the plant world by training myself as a Landscape Designer and Horticulturist. Upon returning to my home land I founded my Environmental Consulting and Landscape Architecture Bureau and my Landscape Building Company which have driven me into unexpectedly fascinating projects located in extreme environments such as Pre artic areas and Altiplanic regions which still fascinate me as working sites.

How did you decide to join Alto Atacama Lodge & Spa?
I really did not decide it. It was the founder of the hotel who invited me to join the project when it was just a dream within his plans.

Can you tell us a little bit more about your concept "Andean Scape"?
Andescape or Andeanscape is a garden style I have elaborated and presented after 20 years of thoroughly studying the Andean Botany, Zoology, Geography, Archaeology, and Anthropology in the Southern Andean Chilean territory and its entourage; through the cognizance of the two last disciplines I came in contact with Precolumbian and Post Columbian local cultures and through these I acquired an understanding of Art, Architecture and Agriculture within the different cultures that have inhabited this territory since the first human dwellers arrived ten thousand years before Christ. All living and non-living elements which constitute the Altiplanic landscape must be specifically adapted to one of the hardest environmental conditions on earth: daily temperature shifts from several degrees below 0 °C to 25° (or even more) above 0°C, rainfall which is near to null in some areas and extremely low in others, solar radiation measurements which are considered as the highest registered on earth, environmental or relative humidity ranging so low as to be unfit for life in many areas, soil salinity being unfit for plant life because of its intensity and, this area is the most seismic on earth. Consequently every life form capable of living within these conditions must have evolved a unique set of anatomical and physiological traits which permits survival in such an extreme site; accordingly, the mineral world is also astonishingly unique in its structure and external appearance. This particular situation originates a most fascinating and surprising landscape which subdued me by the time I understood it with my mind, my senses and a constantly rising passion. This is how I developed a need to express my fascination and I did it by graphically and literally describing what I saw and what I felt; unaware of it, I became the mother of Andeanscape and when my child was mature enough to be delivered, I decided to present it as a homage to Pachamama (Mother Earth) and to the local cultures.

What is your main responsibility at work?
I was invited to work for the Alto Atacama by the founder Andres Mac Lean at the time he was in the process of purchasing the land so I received around 4 hectares of bare land with a few trees and shrubs. I was commanded to design and then build all the exteriors of the project which meant that, from the building’s walls out, I had to elaborate my project. This meant I designed the Andean pond, llama corral, paths, hot baths (Inka baths), gardens, stone work, water features, metal features, benches, orchards, trees and so on. After concluding the design, the building was iniciated. A fundamental part in this process was the seed collecting and plant raising project for all the species present in the gardens which were seeded, cultivated and planted by me for the hotel’s park. Visitors tell me that everything fits so perfectly within the environment to such an extent that is seems to have been there forever. This occurs because I accomplished  my task in the Andean way, the way the Inkas did, by pleasing the Sun and honouring the Pachamama (Mother Earth). All mineral (non-living) materials were painfully searched (it was quite a task) within the entourage and, after being found, they were purchased to the local native communities which owned them. In the Andean world everything has an owner and in most cases it is not an individual but a community. Everything was specifically designed for my project and then built by Atacamanian masons belonging to the local communities. All plants within the garden areas, with the exception of a couple of species, are native and were specially sown by myself and my collaborators after collecting the seed within the surrounding wilderness. After they were mature enough, these plants were transplanted into the area and located according to my design; I can assure you that not a single specimen was planted without my personal contribution in the process.

In the kitchen garden, there are two kinds of plants: Pre Hispanic native species and Post Hispanic naturalized species. This is because when the Spaniards first arrived into South America they brought some of their domestic plants which became naturalized and they have been utilized by the natives as their own since then. Consequently, the Alto Atacama Kitchen Garden includes both, the native and the naturalized species. After this process I have described, the gardens were completed but, as you all know, when this moment arrives, the process of tending the gardens begins and this goes on forever. No garden is completed unless time and nature have provided it with their mature condition. So, I have been personally involved in this by directing the process year by year which means I spent around 120 days on site happily working with my
hands on the soil. The Alto Atacama gardens are totally organic and all the “techniques” utilized in tending them are 100 % native and where personally learnt by me from my ancient “Andean tutors” who are the Atacamanian native farmers. All plants, native to the area, are placed within their natural setting, associated to other species which naturally constitute their surroundings and they are tended by nature itself upon attaining an “adult” condition which allows them to thrive with no irrigation or any other external support. Many native bird species along with lizards, tiny rodents and some foxes visit us or live as residents contributing in creating the effect that our park has been there forever; the living community is, at present, 90 percent sustainable. This does not imply that our task is over; it is being complemented by the “domestication” of other species which will join the existing ones in the park and, by our efforts to protect the native pristine areas in the surroundings. We hope to keep them healthy and untouched as they are at present.

What plants can your guests see at Alto Atacama Lodge?
The Alto Atacama Lodge is a mirror of its surroundings and consequently, while visiting it, the need to pursue what you see within the hotel’s grounds rises and it must be fulfilled. Thus, soft and friendly field trips which constituent the necessary frame for the visit are provided to the garden lovers who honour us with their presence. At the hotel, what has been described by guests as an “Andean forest” receives the out comer who thinks he is arriving to the driest dessert in the world (which is totally true) and does not expect to be greeted by a community of friendly shades provided by a generous group of trees and greenery. All the tree species native to the area thrive within the park along with local shrubs and the edible species within the Kitchen Garden and the forage provided by our Lucerne prairies.