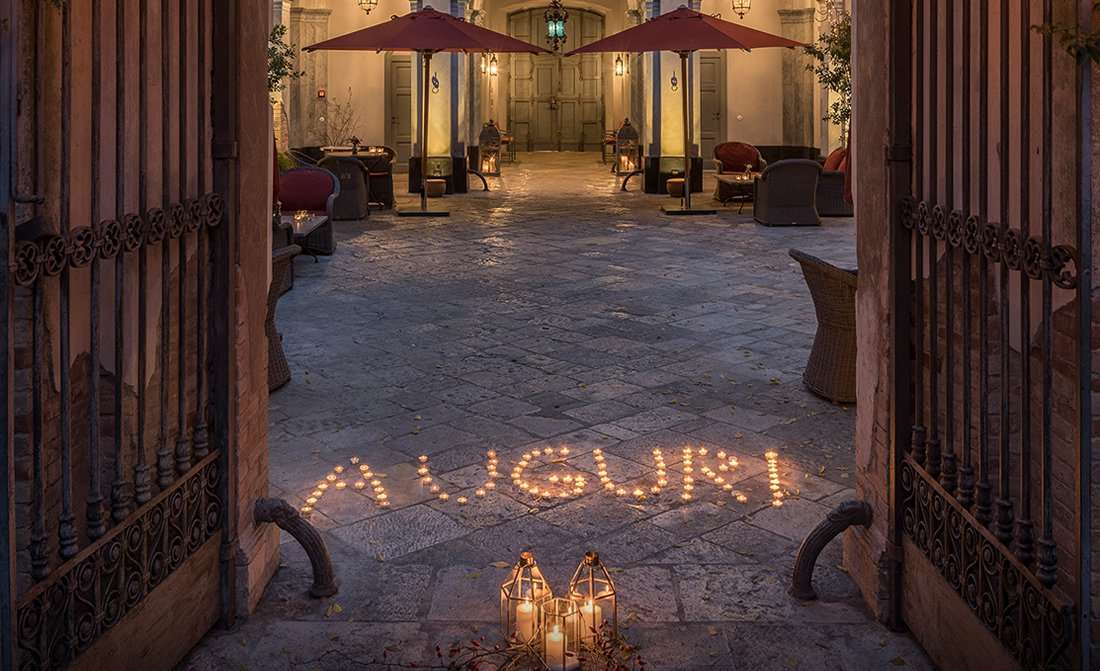 ‘Natale con i tuoi, Pasqua con chi vuoi’ (‘Christmas with your family, Easter with whomever you like’), this is the Italian way! So come and spend a Buon Natale (Merry Christmas) with your family at Palazzo Margherita in 2017. Basilicata, one of Italy’s most unspoiled regions, is where culture, food and wine remain authentic and untouched by the world, and is the perfect place to experience the live tradition of the Italian Natale.

Set in the charming town of Bernalda, where Francis Ford Coppola’s grandfather was born, Palazzo Margherita (owned by F.F.Coppola and his family) delights guests with palatial rooms and suites, delicious authentic cuisine, endless amenities, and hospitality so heartwarming that some visitors choose never to venture beyond the Palazzo walls.

Italy's winter holiday season generally starts with the Feast Day of the Immaculate Conception on December 8, a national holiday. Traditionally, the main focus of Christmas decorations in Italy is the presepe, a Nativity scene or Christmas crib. The Christmas crib is said to have originated with Saint Francis and the craft of carving nativity figures started in the 13th century.

Rossella, the General Manager of the hotel, and her team will welcome you into the unique family atmosphere of this special house. Just as she does at home, she dresses the Palazzo with handmade and elegant holiday decorations. You will experience traditional Christmas recipes in othe hotel's cozy kitchen where Chef Tommaso will share the secrets of our ancestral cuisine. Sitting next to the wood oven, with a good glass of wine in hand, you will be swept away by the NATALE Italiano!

Just a few unique HIGHLIGHTS of this package include:
- Wine tasting in an ancient Masseria –a typical farm house
- Live Southern Italian folk music performance
- A guided visit to the ceramics museum in Grottaglie
- A hands-on cooking lesson at Palazzo Margherita featuring some holiday sweet-tooth recipes
- A guided tour of the local ghost town, Craco
- A guided tour of the Sassi of Matera, Europe's Capital of Culture 2019
- The Italian Christmas Eve meal, Feast of Seven Fishes
- A game of traditional Italian bingo…and so much more!

Time: 7 days (6 night stay)
Transfer: Provided for all destinations listed in the package
Price: on request.

Have you read our interview with Francis Ford Coppola?

Transfer: 1 hour and 15 minutes each way
After a leisurely breakfast at Palazzo Margherita, depart for Lizzano;
Arrive in Lizzano, where you will stop in a winery located in an ancient masseria, a typical farm house.*
Enjoy an aperitivo, tasting some of the finest local Primitivo wine, for centuries made by the people of Puglia and Basilicata following the first harvests;
Experience a traditional country-style lunch in the courtyard of the main masseria, immersed in the bucolic setting of these fertile vineyards, livened up by traditional folk music played for you by a live band;
Return to Palazzo Margherita and enjoy a moment of relaxation;
Dinner at Palazzo Margherita.

*In the heart of the DOC Primitivo di Manduria wine region (the same variety as the Californian Zinfandel Grape), the breathtaking beauty of this vineyard just a stones throw away from the Mediterranean, will capture your attention as you take a passeggiata, a walk, through the vineyards, not least for the ancient Casino Nitti, the old masseria which once belonged to the first Council President of the Kingdom of Italy after the war, Francesco Saverio Nitti (1919-20).

Transfer: 1 hour each way
Your program for the day will be as follows:
After a leisurely breakfast in the dine-in kitchen or courtyard of Palazzo Margherita, departure for Grottaglie and visit its amazing ceramics district;*
Guided visit of the little Ceramics Museum in Grottaglie, and discover the history and significance of the traditional presepi, the nativity scenes.**

*Grottaglie is placed in an area really rich in clay and since the 18th century has been very active in the ceramics production.
**This exhibition, now at its 38th edition, was born to give evidence of the rich artistic and cultural tradition of the nativity scenes in the local tradition, and the collection has grown since its origins in 1980 to host both local and international artifacts.

Depart for Locorotondo and lunch in a typical trattoria;
Guided tour of Locorotondo, one of Puglia's prettiest towns with a proudly conserved, easily-walkable center and a calm, laid-back atmosphere;
Visit the “Valle d’Itria”, the valley where the most ancient examples of the well-known “Trulli” (cylindrical homes with cone roofs) are found: a fabulous and enchanting scenery, a unique and fantastic landscape;
Return to Palazzo Margherita and enjoy a moment of relaxation;
Dinner at Palazzo Margherita.

Breakfast at Palazzo Margherita;
Cooking lesson in the warmth of the dine-in kitchen, where you will learn how to prepare some of the traditional Christmas recipes. Together with Mariella and Tommaso you will discover the most famous traditional Christmas recipes, and learn to prepare the typical ‘cartellate’ (traditional Christmas sweets);
Enjoy an in-room massage to prepare for the excitement ahead!
Traditional “Cenone della Vigilia di Natale”* at Palazzo Margherita;
Join the staff in a ‘Tombolata’, the Italian Bingo, a classic event in every Italian household during the festive period!
For those who wish to go, the Midnight Mass will be held in the Chiesa Madre in Bernalda.

* Perhaps you’ve heard of the Italian-American tradition of the “feast of the seven fishes” — a Christmas Eve dinner where the menu revolves entirely around seafood.  In Basilicata, tradition would have that for Christmas Eve Dinner, 13 dishes be served, including, but not limited to, fish. The much awaited culinary indulgence comes from southern Italy, where Roman Catholics abstained from consuming meat on Christmas Eve, instead opting for dishes like baccalà (salt cod).

Transfer: 40 minutes each way
Breakfast at Palazzo Margherita;
Departure for Anglona and visit of the Calanchi Area;*
If you wish, attend Mass at the beautiful sanctuary church of Anglona;
Traditionally this is a day of rest, spent recovering from the previous day’s festivities! A short drive to Craco to discover this atmospheric Ghost Town** will be the perfect pick-me-up on Christmas Day;
Return to Palazzo Margherita for the classic ‘Pranzo di Natale’;
Relaxation time;
Before dinner, join the cooks in the kitchen in preparing the traditional ‘pettole’, a staple of Italian feast days;
Enjoy dinner and a classic film screening in the Salone, tasting the various types of pettole you crafted, accompanied by an assortment of local cheeses, mulled wine and roasted chestnuts;
Before bed, indulge in a special Christmas chocolate and rum and grappa from local grape varieties in the cozy Family Bar.

*The Calanchi are a type of dry terrain where softer sedimentary rocks and clay-rich soils have been extensively eroded by wind and water.
**The abandonment of the old houses transformed the area into a ghost town often used as a film set for historical films and as a tourist destination through guided tours. The village of Craco can be reached via a road that climbs from the valley up the hill. The grooves are deep and steep offering a picturesque and suggestive landscape. Surrounded by pictoreque fields and olive groves, the town is a single sculptural composition of the closely aligned houses nested on the limestone cliff. Above the vaulted alleys and steep stairways rise the Norman Tower and the 13th century castle.

Transfer: 45 minutes each way
Breakfast at Palazzo Margherita;
Visit the Crypt of the Original Sin (also known as the “Sistine Chapel” of cave wall paintings), along the ancient Appian Way with its suggestive representation of scenes of the Old and the New Testament, in a cycle of frescoes dating back to the 9thcentury AD;
Depart for Matera and enjoy lunch sampling local produce in a typical local trattoria;
Guided tour of the ancient Sassi area of Matera and the Park of the Cave Churches. The Sassi originated from a prehistoric settlement, and consist of houses dug into the limestone rock. The Sassi and the Park of the Cave Churches of Matera are the most outstanding, intact example of a prehistoric settlement in the Mediterranean region, perfectly adapted to its terrain and ecosystem. The first inhabited zone dates from the Paleolithic, while later settlements illustrate a number of significant stages in human history, and in 1992 the site was inscribed on the World Heritage List;
Visit the Oil Museum in Matera, located in an old rock press in the heart of the Sassi.*
Spare time to tour the Art&Craft studios in town (map and list provided by us);
Return to Palazzo Margherita and time to relax;
Dinner at Palazzo Margherita.

*The building hosting the MOOM is assumed to date back to the XV-XVI century. The structure was initially composed exclusively of caves dung into the tufa rock. Upon entering, one notices immediately how the facilities were enlarged over time thanks to successive excavation allowing for the expansion of existing rooms and the creation of new ones.

Suggestion: Wear sturdy rubber-soled shoes or bring a pair with you.

More information about Palazzo Margherita can be found here.